As a follow up to my last post, I should say that the aggravations we were experiencing have passed for the most part. Jonah has been doing exceptionally well for the past week and a half. There have been just a handful of tantrums, but they are gradually getting much more manageable. His demeanor overall has improved dramatically and he has been exceptionally happy and lovable.

I've been working on a blog post for Autism Awareness Month. I wanted to share what I felt about the public perception of autism with those of you who read this blog. However, I feel the events of this past weekend more relevant to what I am facing as the parent of an autistic child in recovery therapy, and the problems we face as a society in relation to autism. So, the other post will have to wait.

We received tickets to the Padre's baseball games Saturday and Sunday as a gift from a dear friend. I decided that I would take Jonah on the trolley for the Saturday night game. This was a brave step on my part, but I felt that his behaviors had calmed enough that it should be manageable. Plus, Jonah was very motivated and excited to ride the trolley. (I shamefully admit that I have not taken him on the trolley, but it is something I would like to do more with him. I've been hesitant to do so in the past because the trolley scares me a bit. I've heard horror stories about people who were beat to crap while other trolley riders looked past it. Shocking, right?!)

Back on topic... Jonah was super excited to ride the trolley. See... 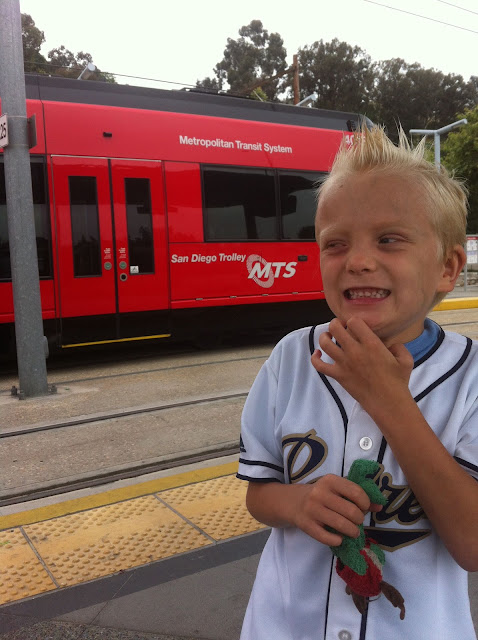 And posing with his "Cute Little Baby Green Bear"... 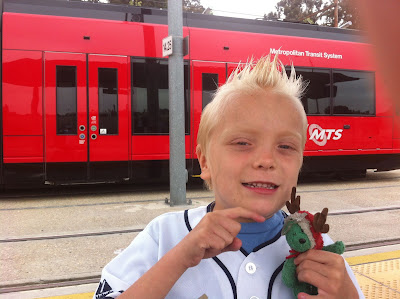 Getting downtown, and all activities prior to the game starting went flawlessly. When I told Jonah we were going to the baseball game a few days before, he immediately requested cotton candy. I was so impressed that he remembered and asked for it instantly, of course I said yes. I know this stuff is bad for you, but I believe that you have to allow for little treats here and there. Plus, watching him eat cotton candy is the highlight of every baseball game I've ever been to with him. 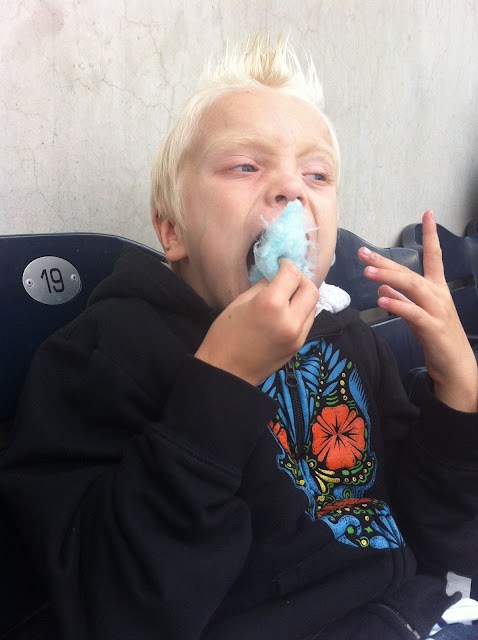 He did end up having a difficult tantrum around the 6th inning. He was definitely over stimulated, and I'm sure the sugar didn't help. He wanted to start throwing objects, particularly a cup with ice leftover from a beverage. I ended up wrestling him in the stands for about 5 minutes while every one kept glancing over to see. He was trying to hit and scratch, and bang his head on concrete, all in an attempt to get a free hand and fling that cup with ice into the crowd in front of us. The guys that were sitting next to us needed to exit the stands, and I apologized to them, explaining that he is autistic and having a tantrum. This announcement seemed to ease the crowd.

I decided it was time to leave once he had calmed down. When we got to the trolley stop, most people were leaving the game early too. There was a group of rowdy guys that were heavily intoxicated. I'll just go ahead and say it bluntly. They were drunk and they were Marines. If it sounds like I am suggesting that a drunk Marine is worse than a normal drunk person, then that is exactly what I am suggesting. It's shameful that a select few can generate such a disgraceful opinion on my behalf of drunk Marines in general, but they would exceed my preconceived social expectations of how drunk Marines behave.

I took Jonah past them, and he sat patiently and waited on the bench for the trolley to arrive. We were lucky to get seats. Once the trolley arrived, I snagged a seat next to a sweet young woman who was very complimentary of Jonah's cuteness, and Jonah snagged the seat across from us next to her friend. The trolley was crowded, lots of people standing. The doors were closed, and then they opened, and the drunk Marines came crowding in.

They were excessively loud, demonstrated all ranges of profanity, pushing each other, making everyone else on the trolley uncomfortable. There were children right next to them, and they would not let up on the vulgarity. The family that was standing next to them started to urge their kids to move toward the back of the trolley when three of the guys started wrestling and pushing in our direction toward Jonah. I immediately went into protective mode, and said "Excuse me. My son is autistic, and I would appreciate it if he was not subjected to your behavior at this time."

They stopped quietly. People around us started nodding at me in approval. The father of the family that was next to us mouthed "Thank You."

He nodded yes and said "I'm about to say something."

I put my hand up and asked the guys "Do you have something to say about autism?"

Busting out into a loud group chuckle, one guy turned to me and said while laughing "I just don't understand what your kid being autistic has to do with anything."

Now, I could see the trolley passengers getting uncomfortable again at the thought of the confrontation that was about to unfold. Steam was literally coming out of my ears. I said "It's because he is disabled, and I don't want your behavior to harm or upset him."

They stayed quiet after that, and the girl next to me reassured me that I did the right thing. She told me that the group of Marines sat next to her and her family on the trolley to the game. She told me the guy that made the insensitive comment had shared with them that he had a 6 month old daughter, and we both agreed that he was an asshole for acting like this while drunk in public. After a few stops, I noticed that the group of guys had left. In fact most people had. And then suddenly, they came back on.

They sat down and were fine. The one guy even smiled and nodded at me. I smiled back to be polite. We were only two stops from home when I heard the group of guys chuckling, and one of them again saying "autistic"with a slow slur. I put my head back and waited a moment to see if I would hear it again. He said it again, and they started laughing again.

I said very loudly "1 in 50! That's how many kids are estimated to have autism right now. There will be more children diagnosed with autism this year than any other illness combined. You guys think it's cool to sit there and act like a bunch of drunk assholes, but it might serve you to know a little about what is happening to our children." I turned to the guy with the 6th month old daughter, and said "You should know that there is no known cause for autism. You should learn more about these issues so you can keep your daughter healthy and safe, instead of acting like a drunk asshole."

He was pissed. His buddy had to stand up and block him to keep from coming back toward us. "You don't talk about my daughter. Keep my daughter out of your mouth. I swear to God..."

I came back "I'm only advising you to keep her safe and healthy, unlike the way you are mocking me and talking about my son."

I wanted to ask them who their CO was. Like they would have told me.

I didn't want to let the bad end to the evening spoil the fun we had already had the rest of the day, especially since we had to go back to another baseball game in the morning. Back to back baseball games are exhausting, but my sister and her beloved were able to join us for the game. Jonah was excited and in an excellent mood. We had a great Sunday morning, and he had already finished another cotton candy when we set out on a hunt for a gluten free hot dog.

As we came down an escalator, Jonah recognized a water wall/fountain that he ran to see. He was so excited, saying "Wow. Look it. That's awesome." I agreed with him and let him know that we would need to go in one minute. Then he said "Okay. Mommy, I want to take a picture. Give me the phone, please."

My jaw dropped. I hurried to get the phone in disbelief of what I had heard him say. When I handed him the phone, he steadied the camera and snapped this image... 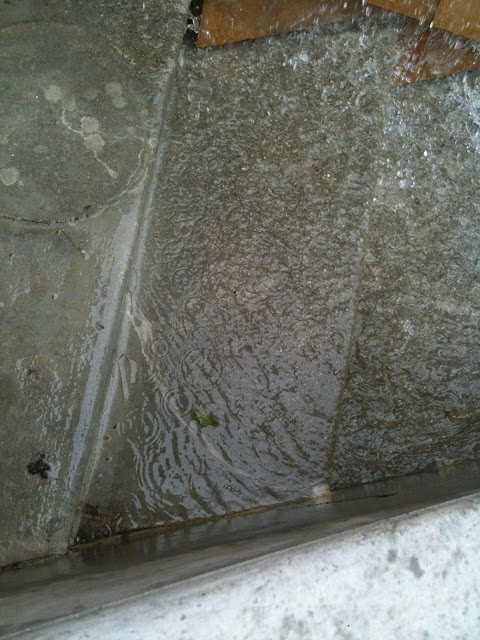 Then, I asked him if he wanted me to take a picture of him sitting in front of the fountain, and he said very happily "Okay. Yes please!" and sat down and posed. He hasn't posed like this for me in years. 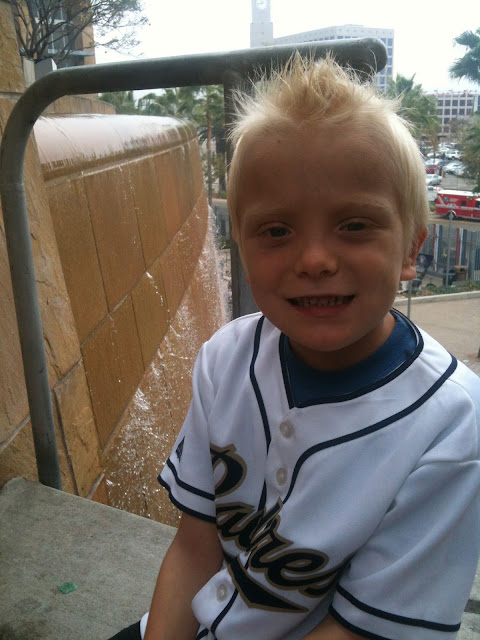 I gave him the phone and asked him if he wanted to see it, and he looked and said "Oh so cute. Now Mommy, it's your turn. Sit." So I sat, and he held up the phone, said "Say cheese" and took this... 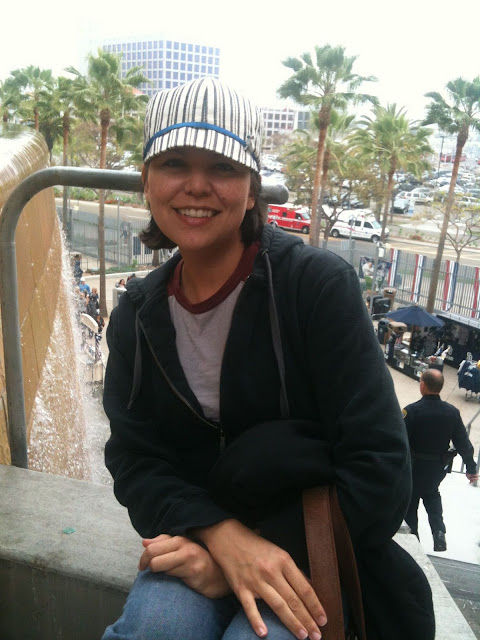 I was on the verge of tears. I could not believe what he had just been able to communicate with me. To think that was not possible a year and a half ago when we started CEASE. It was not possible last month even. Amazing. I want to cry writing it. It's just so exciting. Not to mention, one of the best photos taken of me in a long time.

The experiences of this past weekend are why I work so hard for Jonah. These are the reasons why we need to raise awareness for autism. The encounter on Saturday is just evidence to the insensitivity that exists in our society regarding autism. Of course the group of Marines were mocking me, because they didn't understand that my concern was preventing Jonah from getting hurt or upset by their rowdiness and perhaps melting down with another tantrum. How are they supposed to understand autistic sensitivities? The public is not prepared for the challenges that this generation of children will face. And, how are we supposed to prepare our autistic children for what general society has to offer them? How are we suppose to teach them to protect themselves, let alone their best interests? And our government certainly isn't doing enough at this point because the rate of diagnosis keeps climbing up.  This is why we need autism awareness.

We need more awareness for what is working. Things like CEASE therapy, diets, bio meds, etc. Without CEASE therapy, I don't believe the last three pictures of happiness in this post would have been possible. So, I'll keep fighting because those are the moments that make it all worth it. Increased awareness brings hope.  Jonah is my hope. He's happy and making amazing progress right now. This is why we need autism awareness.

What are you doing for autism awareness? Write your local representative. Share your own story. Share this blog. BE a voice for our children.