This past Tuesday, I decided to play hooky and took Jonah to Disneyland for the day. Disneyland is a great motivator for Jonah. He does really well at Disneyland. He loves roller coasters the most. We map out what rides we want to go on first days before our trips. I have so much fun with Jonah there, and it provides strong bonding time for us.

This time, this trip, was a revelation to all the little ways Jonah is starting to open up. It's been a couple months since we last flexed our passes, but the changes in his experience were notable. First, he invited my sister and her boyfriend, affectionately referred to as 'Imo' and 'Sockie' (Scotty) to come with us. This is something he has never done before. No offense to Imo and Sockie, but he generally doesn't like spending a lot of time with them because it is associated with the time I spend away from him at work. Whenever I tell him we are going to see Imo and Scotty, he says "Mo Imo Sockies house. Mo Mommy's work." Over the past few weeks, this response has changed, and he has been quite cooperative, and even excited to see Imo and Scotty.

Then, he kept insisting we go on Pirates (of the Caribbean) first. In the car on the way up, he was saying "Pirates goes so fast." I'm like "No it doesn't." But when we were finally on Pirates, and we came to the part where you have the steep drop in the boat, he said "Hold on! Pirates going down so fast right here!" He was shimmying his butt and had a little squeal in his giggle as he always does when he's excited. So, I stood corrected with his NINE word statement and said, "You are right, Jonah. Pirates does go fast right here."

He laughed out loud at characters throughout the park, and kept saying "That's so fummy!" Of course he means funny, but this is a recent new phrase that he is using very appropriately and enjoying. He also wanted to meet Mickey Mouse for the first time. It's not like I haven't tried in the past, with Mickey or any of the other characters, but he normally just waves and says "Hi" very disconnected from the reality of the characters. This time he was engaged, walked up to Mickey on his own, gave Mickey a hug, and posed for pictures. 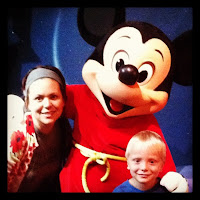 I couldn't have been happier for Jonah. He always enjoys Disneyland, but this time was different. This time he enjoyed it on a different level. This time, we really enjoyed it together. We had almost NO behaviors, and the few minor behaviors that arose were quickly corrected. He talked about everything, some of it I couldn't understand, but he kept saying "Have so much fum at Dismey-yamb!" and "Have so much fum at Dismey-yamb with Mommy!"

We hit up Starbucks for the drive home where Jonah requested a bag of Sweet Potato Chips. I bought him the chips and when we got to the car, I tried to open them. I have never had a harder time opening up a bag of chips in my life. I even tried to rip it with my teeth. So, I'm pulling, on the two sides of the bag trying to get it to split open, Jonah's laughing and says "Mommy's working so hard. Mommy's working her muscles." As I was cracking up, the bag finally gave in. And for that second, everything was right in our tiny world with just the two of us.