I wanted to share the email I just sent to Jonah's homeopathic practitioner moments ago:

I hope all is well. I just wanted to send you a quick update of Jonah's progress, but I have a ton of good stuff to share that I am very excited about... so this may get a little long. He has been doing amazing with this round of the DTaP clearing. After the first dose of 30C on 4/10, I noticed minor aggravations and defiance in his behavior immediately the next morning. Much milder than we experienced with the first two rounds, but back to normal on Thursday. He received the next dose the following Friday and I noticed minor defiance and aggravations first thing on Saturday morning, this time just a little more intense than earlier in the week. There was a lot of screaming and squawking. Sunday morning, his behaviors increased significantly, and then we went to the lake so he could ride his bike. He developed a little bit of a runny nose after for about 10-15 minutes. And then he was awesome! I was expecting to see an increase in behaviors when we went to the 200C, but he sailed through last week perfectly with very mild mischief. He received the 1M dose this past Tuesday.


I'm not sure if we should be seeing such dramatic changes after each dosing, but it is markedly noticeable to me. He has been a little more mischievous, but very easy to redirect and discipline. He seems to have more comprehension and awareness of his behaviors being inappropriate, so he is quick to correct himself when I warn him that he is making bad choices. He has also been very helpful around the house, showing an eagerness to help take care of himself. He initiated helping me carry in the groceries, which never happens (even when I ask him to help he protests). When I gave him the package of toilet paper to carry, he walked into the house and said "Put toilet paper in the bathroom," and walked to the bathroom to put it away. I know it sounds like a little thing, but this was actually just the first sign of a huge shift that I am beginning to see emerge in him.
The most amazing part is that his speech continues to improve dramatically. He has been singing to himself, and speaking in full sentences. He has been making observational statements. He's been developing descriptions of objects. For example, we saw geese when we went to the lake last Sunday. His first statement was a typical one word "Goose." I said "Yes, goose, there's three, so we call them geese." Then he said "Look at the goose. Look it's a giant, white goose." I looked, and two of the three geese were grey, and one was a huge white goose. These descriptions are becoming more fluid in his dialog everyday. Today was one of the best days so far. I am seeing so much change, and he is such a loving, sweet, and happy little boy.


I love Jonah incredibly, and would do anything for him. I have always enjoyed being his mother, but there was always so much concern and distraction about how he was behaving; worrying about things like if he was going to find the lotion that was hidden in the dresser in the middle of the night and paint the walls with it. But these past few weeks, I've been able to just enjoy him and let go of my concerns and distractions because he hasn't been doing these things. There has just been a greater level of comprehension between us. I feel like I'm just beginning to get to know my son.


Friday, Jonah will get the second 1M, and then move to the 10M next week. Let me know what you think. I just can't believe this is happening for real.

We are about to begin week three of the third clearing for DTaP. The 30C and 200C doses have gone pretty smoothly, aside from a little mischief. Jonah has always been mischievous, which is part of his charm. One of his teachers said that it is a sign of intelligence. Everyday, I am seeing more and more of this sweet boy. He is expressing more and understanding more. The clarity of his speech is improving and he is making many unprompted observational statements. There are small steps forward everyday. Very exciting and reassuring.

He wanted to eat Crabby Patties for dinner Thursday night. I was able to get him to try crabby patties about 2 years ago after he developed an affection for Spongebob. We made cheeseburgers then, but now we make veggie burgers. When I told Jonah we didn't have any crabby patties, he said "Oh, crabby pappy all gone. Mommy go to Mr. Crab's house?" It's the little things like this that keep me going!

I've been circling around the facebook pages and websites for autism more frequently again. I became discouraged toward the end of last year, and needed to take a break. It sometimes feels like no one gets it and I'm beating my head against a brick wall. While most of the emails and feedback I have received from friends and strangers has been positive, there is the occasional negative commentary. It's as if some people feel I have failed to accept my son's autism and subsequently failed to accept my son for who he is. Neither could be further from the truth. If I believe that my son can be recovered from his autism, it does not mean I do not accept him. It means I want him to get better. I want the most for him, just like any parent want for their child. How is that confusing?

There is a lot more surfacing about CEASE Therapy, which must mean that people are experiencing good things with CEASE Therapy. I've been delighted to stumble upon a broader CEASE network online.  For me, it just further proves what I have found to be true (at least in Jonah's case) about the contributions vaccinations have made to the growing rate of diagnosis for autism. If it were not the vaccines that caused Jonah's autism, why is this working for him? Yes, there are children that are autistic that never received vaccinations.  That is not the case for all. Unless you examine the medical history of the parents, it is impossible to determine that some toxin didn't create a genetic imprint that altered the child. There is so much we do not know about the human body, so why is it so hard for people to humble their opinions and admit that? I could be wrong, but the proof for me is in Jonah's progress. Jonah may not experience a full recovery from autism, but I would be happy to settle for the little bit of progress we have experienced so far.

There are so many parents out there who feel it and know it. I am often looked at with a scornful eye when I blurt this out, but the truth is "VACCINES CAUSE AUTISM." Which leads me to point out something else that needs to be addressed. In addition to the spike in autism diagnosis experienced over the last few decades, there are many other known and proven harmful side effects suffered by healthy children and adults caused by vaccinations. For statistical analysis, the United States has the highest number of vaccines required for infants before the age of 5 in the world, and subsequently the highest occurrence of SIDS in the world. Healthy adults have been subject to suffering from seizures, strokes, and paralysis directly associated with vaccinations.

I recently came across an organization known as Shot by Shot, funded by the California Immunization Clinic (CIC). The website for CIC boasts using social media to "build a movement." This includes posting tragic articles of people who have died or fallen ill to a vaccine-preventable disease. It was astonishing to me that the stories virtually criminalize those that would elect not to vaccinate their children. I posted a comment to the Shot by Shot facebook page in hopes to challenge this notion, but my post was removed without feedback from the organization. Here is an image of the feedback from visitors of the page prior to the removal of my comment. 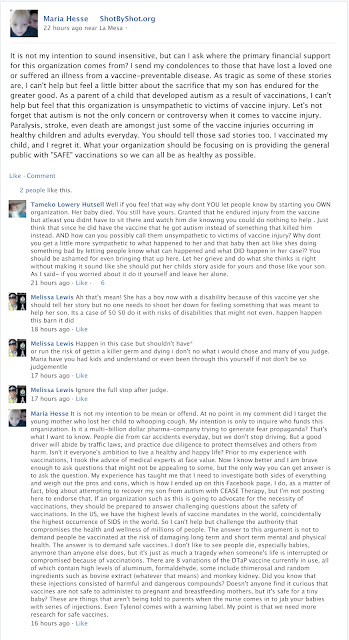 It's personally upsetting to me that people can be so easily misled to believe that vaccinations are the solution to all of our health care concerns. I was misled at my child's expense. It's upsetting that people think the solution is to promote vaccinations regardless of dangerous side effects. As one of the comments implied, at least Jonah didn't die from his autism. This retaliation was referencing one of the stories of a young mother who lost her child to whooping cough.

Since Jonah's current clearing is for DTaP, let's look at the DTaP vaccine for a bit. While the CDC reports that less than 1 in 1 million people will suffer a severe allergic reaction to the DTaP vaccine, some of the other severe side effects include long term seizures, coma, or lowered consciousness and permanent brain damage. These are very low risk according to the CDC, but who wants to chance it? Especially when you look at the list of chemicals that go into the DTaP vaccines. There are 6 variations of DTaP currently used in the US. DTaP vaccines are only recommended for children under the age of 7, while there are other concoctions for adults including DtaP and DT. It was alarming to see that aluminum hydroxide, aluminum potassium sulfate, and aluminum phosphate as one of the first ingredients listed in all 6 variations of DTaP vaccine. I could write an entire article on the effects of aluminum poisoning. Perhaps I will save that for a future post. These are actually excipients, or inactive ingredients in the vaccine. Other alarming chemicals include formaldehyde (poisonous), and the ever-controversial thimerosal (mercury... poisonous). Detect the note of sarcasm in my voice when I state that I particularly enjoyed learning that monkey kidney and bovine extract may also have been injected into my child. I know what bovine means, but I hesitate when it comes to comprehending the broadness of "bovine extract." Cows are kind of big. At least when it says monkey kidney, you know you're getting monkey kidney.

As if the consistency of the DTaP vaccine wasn't enough to administer in one injection, it is administered amongst a combination of vaccines containing similar dangerous chemicals. As a responsible parent, I have faltered. I did not examine these facts as I needed to for Jonah, which is why it is my intention to bring awareness to the issue. Vaccines are contributing to the increase in autism. This is not the same autism witnessed developing from case number 1 in 1944. This is autism expression brought on by damaging side effects from severe internal toxicity. There is not one vaccine causing this, there is not one chemical causing this, but the combination of administering all of it together... that is something that has yet to be addressed.
Posted by Maria at 12:44 PM No comments: